Top 8 Things To Do In The Kimberley Region

With spectacular gorges, boab-studded plains, dramatic coastline, sacred waterholes, and great rivers that flow only for a few months of the year, the rugged Kimberley region of Western Australia is one of the most exciting and beautiful regions in the world.

Covering the vast north-west corner of Australia, and roughly three times the size of England, the Kimberley remains a little-travelled and remote area of great rivers and magnificent scenery. One of the world’s most wild regions, and one of Australia’s last frontiers, the Kimberley never fails to evoke a sense of awe among travellers seeking to experience the ‘real’ Australian Outback.

Following several big rain events in January, the Kimberley region has experienced one of its wettest seasons on record with the monsoonal weather leaving behind a green and rejuvenated landscape.

Visitors who travel to the Kimberley between April and May will be treated to some spectacular natural sights that they wouldn’t be able to see during peak dry season: full swimming holes, green pastures, swollen rivers and thunderous waterfalls that are bound to delight.

Whether you choose to visit the Kimberley during the wet or dry season, there is so much to see and do in this stunningly beautiful region. We’ve been exploring the Kimberley for close to 20 years now and have compiled a list of some of our favourite experiences and things to do in the Kimberley. Whether you’re searching for your next outback adventure, or want to know more about Australia’s last great wilderness, we hope you’ll find this article on the Kimberley’s wonders both helpful and inspiring. 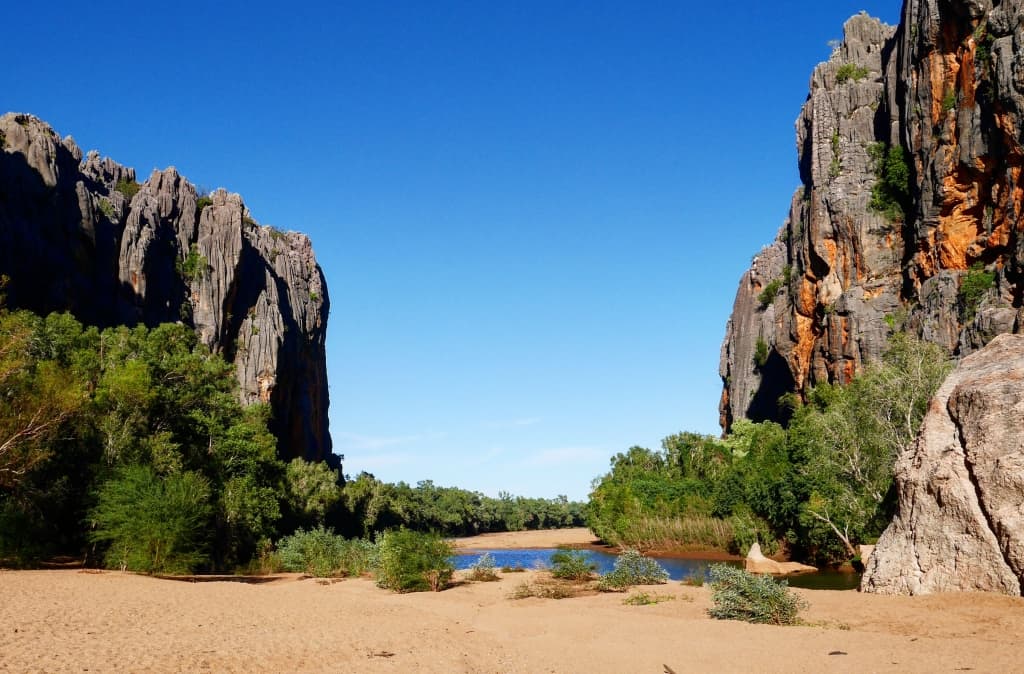 Take in the natural beauty and towering walls of Windjana Gorge.

Windjana Gorge, one of the Kimberley’s most impressive gorges, lies in the Napier Range about 150 kilometres from Fitzroy Crossing. Carved over centuries by the Lennard River’s floodwaters, the near vertical walls of the 3.5km long gorge soar up to 100m above the Lennard River, providing a spectacular backdrop for bush walkers. During the wet season, the raging torrents of the Lennard River make Windjana Gorge impassable, but in the dry season the waters recede quickly, forming a series of picturesque pools along the winding path. As well as the spectacular ancient rock formations, visitors can watch freshwater crocodiles bask in the sun and see fossilised marine life forms in the gorge’s limestone walls.

2. Step back in time at Tunnel Creek 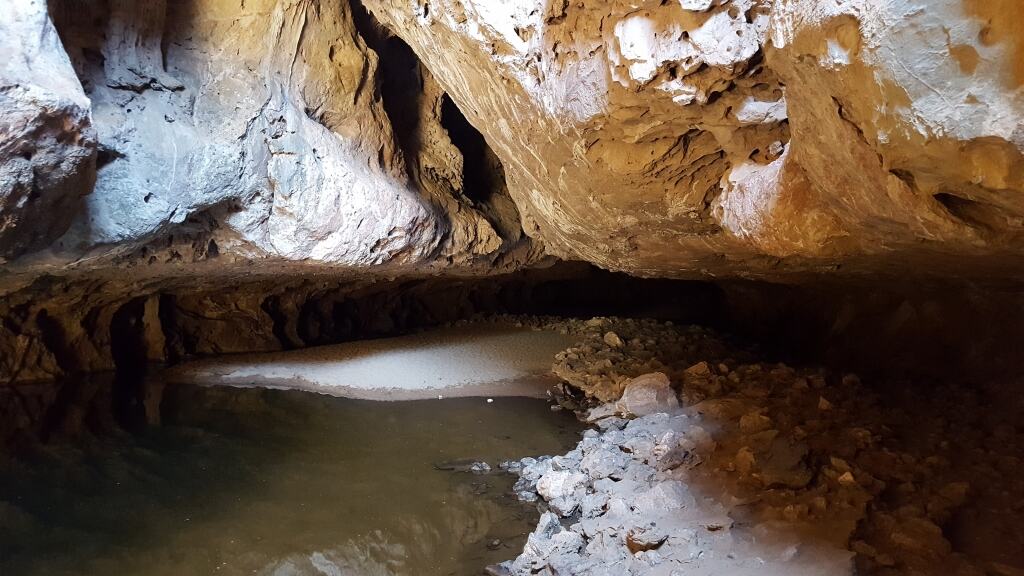 Discover the beautiful formations and fresh-water pools of Tunnel Creek.

Just an hour’s drive from Windjana Gorge is Tunnel Creek National Park, Western Australia’s oldest cave system and part of the same 350 million year old Devonian barrier reef system as the Napier Ranges. Visitors who are prepared to wade through waist-deep water in places can walk all the way along Tunnel Creek, a 750 metre long cave that pierces the limestone range from one side to the other. Near the north entrance to the tunnel are Aboriginal rock paintings and a cave that was famously used as a hide out by Aboriginal tracker Jundumarra (also known as Pigeon) between 1894 and 1897. 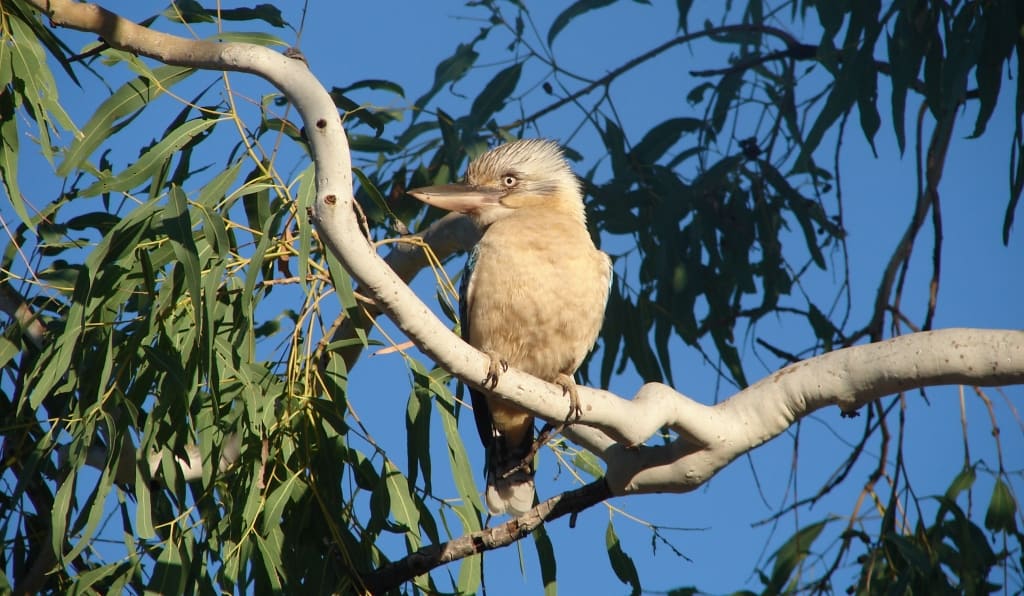 For nature lovers and bird watchers, there is no better experience than getting off the beaten track and spending a couple of days exploring Mornington Wildlife Sanctuary from a comfortable base at Mornington Wilderness Camp. Nestled away in the heart of the pristine Kimberley bushland and covering more than 3,000km2, this remarkable sanctuary is owned and managed by the Australian Wildlife Conservancy, with all proceeds from the Wilderness Camp going towards wildlife conservation. Visitors can explore the various walking trails, canoe down Diamond Gorge, swim in Sir John Gorge and observe over 200 species of birds during their stay. 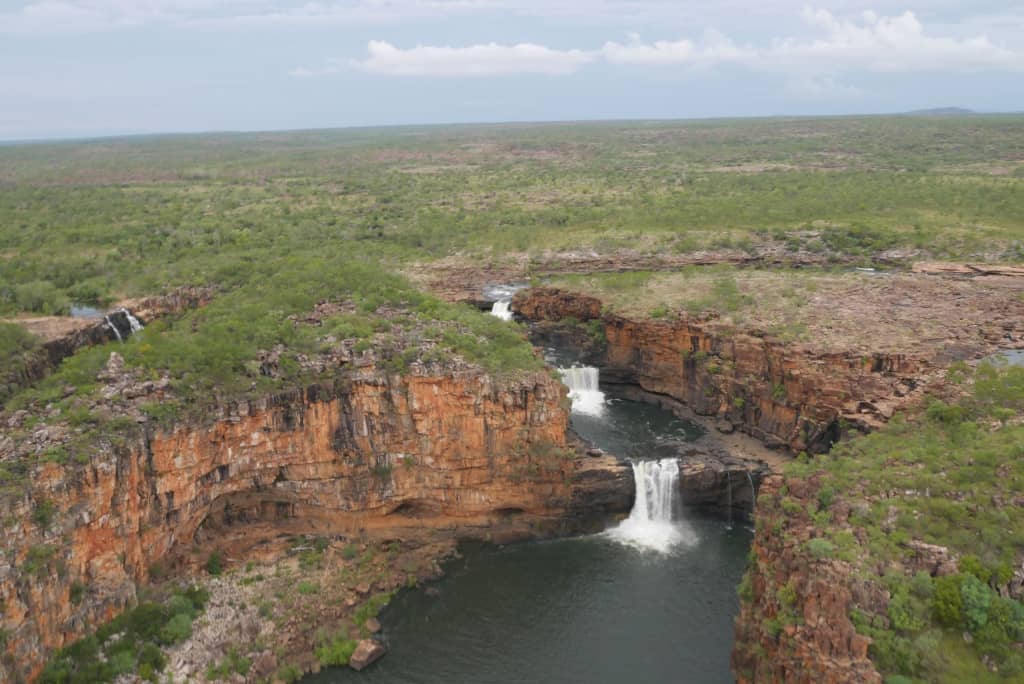 See the Mitchell Falls from above with a scenic helicopter flight.

Located 20km from a now abandoned mining caretaker’s camp by Camp Creek, the spectacular multitiered Mitchell Falls in the Mitchell River National Park is an outstanding sight for any traveller. Stay at Mitchell Falls Wilderness Lodge and walk the 3.5 kilometres to the falls’ layered sandstone structure before cooling off in the emerald freshwater pools. For a truly memorable experience, take a scenic helicopter flight over Mitchell Falls. Also take this opportunity to explore Mitchell Plateau and marvel at its ancient, tall, fan palms, Aboriginal rock paintings and the Surveyors Pool.

5. Watch the sun set over the Cockburn Ranges 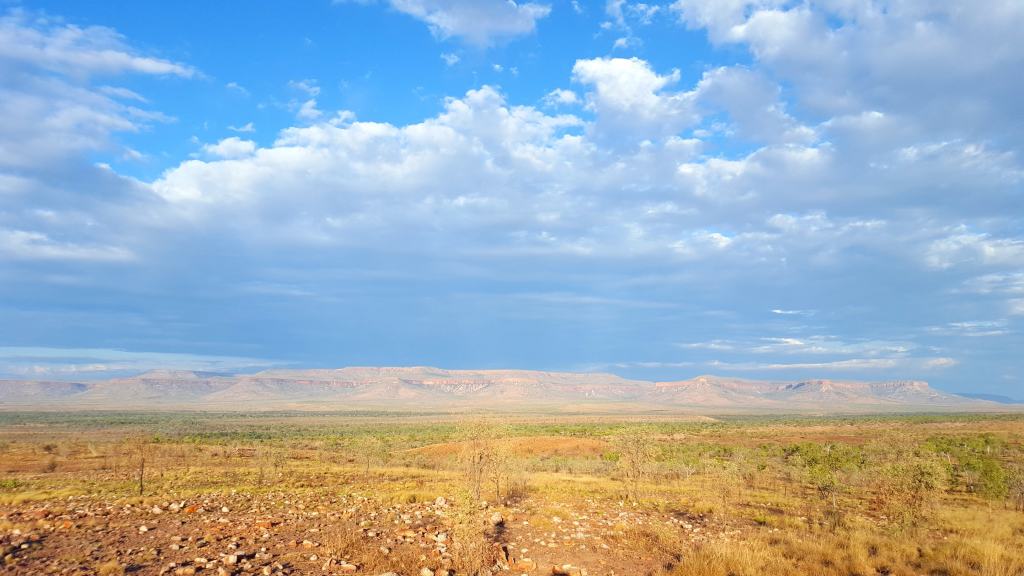 The imposing and spectacular orange cliffs of the Cockburn Ranges are a delight for any visitor.

The magnificent sandstone cliffs of the iconic Cockburn Ranges never fail to delight travellers who explore the Kimberley region by 4WD along Gibb River Road. Rising 600m above the surrounding plains, the majestic Cockburn Ranges are especially beautiful when the sun sets and the western face is aglow with pink, red and orange hues. Visitors can choose to camp near the Pentecost River or stay at Home Valley Station, just 10km past the river crossing, where they can enjoy horse treks, gorge walks and some of Australia’s best fishing spots.

6. Stay in the thriving township of Kununurra 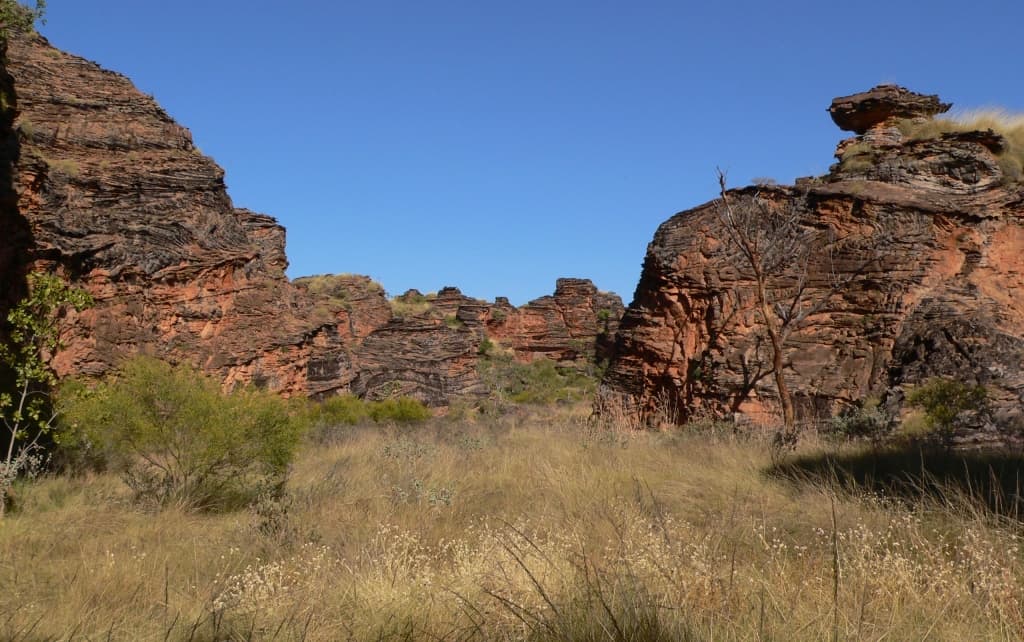 Kununurra, the largest town in Western Australia north of Broome with a population of 5,000, has the best shops and facilities in the Kimberley. Founded in the 1960s, this bustling township has established itself as an excellent base from which to explore a multitude of attractions, including the Ord River, Kununurra River, and Kelly’s Knob Lookout. There’s even a national park on its doorstep: Hidden Valley (or Mirima National Park) is only 1km from Kununurra’s post office and is riddled with fascinating caves, colourful layered rocks, and mini gorges. Celebrity Tree Park and Waringarri Aboriginal Arts Centre are also well worth a visit while those who take a boat out on the lake at sunset may be lucky enough to spot freshwater crocodiles, black-headed water pythons and other wildlife. 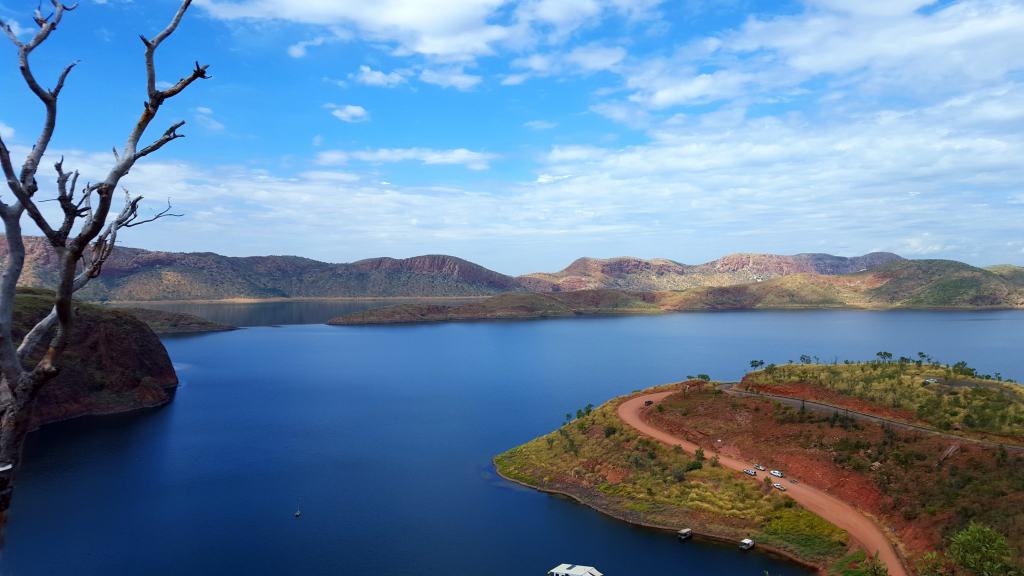 The massive man-made Lake Argyle, the ‘Jewel of the Kimberley’.

Lake Argyle, just two kilometres from Kununurra by sealed road, was created when the Ord River was dammed in 1971 and is the largest body of fresh water in Australia, holding up to 30 times as much water as Sydney Harbour and containing about 90 islands. Travellers with a little more time on their hands should visit the Ord River Dam, about 67 kilometres from Kununurra, for some truly incredible scenes. The sheer grandeur of the Carr Boyd Range around Lake Argyle – the ‘Jewel of the Kimberley’ – is best appreciated with an afternoon boat cruise on the lake, when the light bounces off its impressive peaks and cliffs. 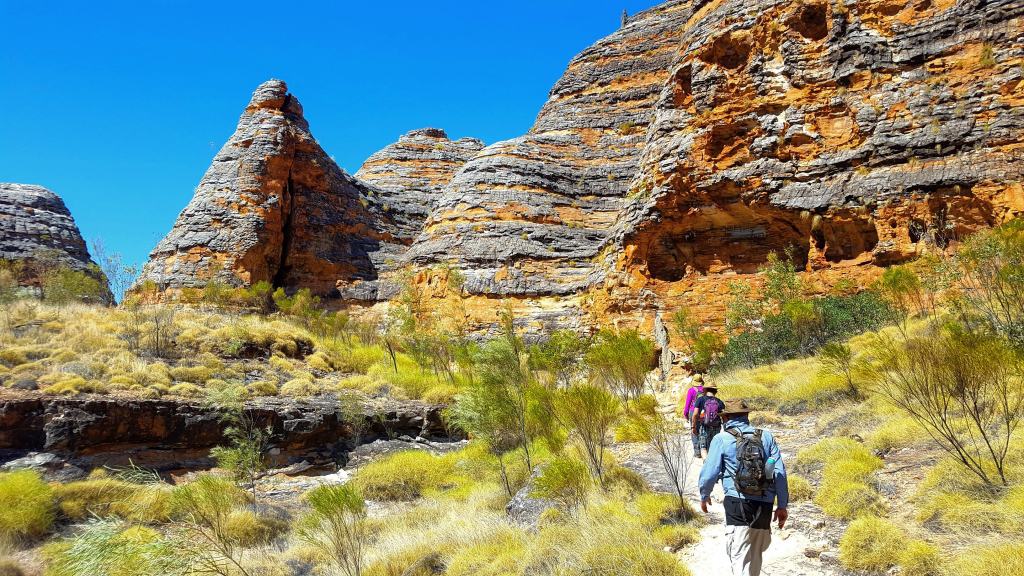 The orange and black striped beehive domes of the 350 million year old Bungle Bungle Range, one of Australia’s most extraordinary and iconic landscapes, has intrigued and delighted visitors to Purnululu National Park since the relatively unknown area was first filmed by a TV crew in 1982. Access to the Bungle Bungles is limited to 4WDs with good clearance, although many parts are still inaccessible from the ground (in this case, flights and helicopter rides prove to be money well spent!) More than 200m above the surrounding plain, the Bungle Bungles – and their uniquely named attractions such as Echidna Chasm, Cathedral Gorge, and Piccaninny Creek Lookout – are an amazing spectacle whether explored from the ground or from the air.

Best time to visit the Kimberley

The prime time to visit the Kimberley is during the dry season from June to September, when temperatures hover around 30C and the skies are clear. But visiting the Kimberley a little earlier, in April or May, means you’ll be coming right at the end of a record wet season when the waterfalls will be thundering and the lush landscape is painted green.

If you want to avoid the crowds and take advantage of an incredible wet season, there’s no better time to enquire about a small group Kimberley Outback Tour!

Subscribe to our newsletter for the latest blog articles, special offers and outback travel tips straight to your inbox!